Meet them when they are babies . . 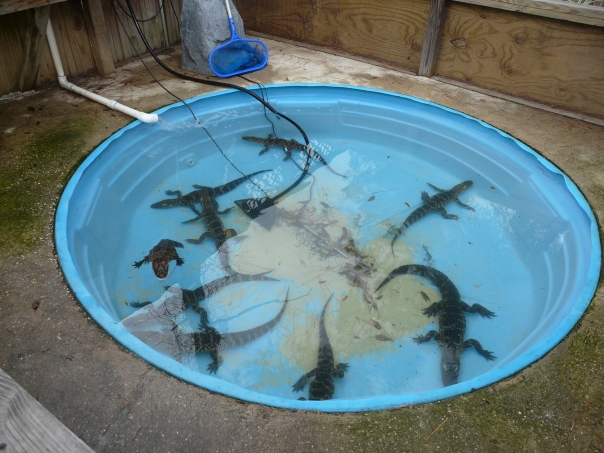 Handle them when they are young and have a souvenir photo taken . . . .

Handle them when they are older and have a souvenir photo taken . . . . 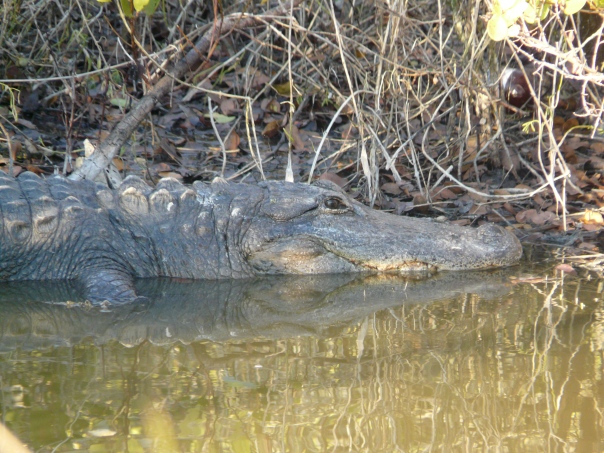 Observe them in the wild. See that big boy? 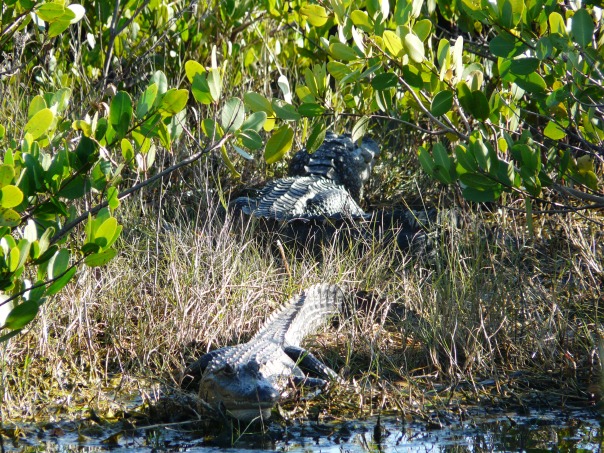 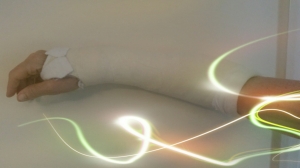 Great idea Jude! When people say, ‘What happened to your arm?’ I say ‘Well . . . . when I was in Florida I was attacked by an alligator.’

Much more fun than saying, ‘I’ve had an operation on my wrist.’

No one believes me but it’s good for a laugh.

A heartfelt thanks to all my friends,

While on our jolly way we wend.

So many have come through for me,

To wish us well, not misery!

‘Cause the world’s too large you’ll hear me cursin’!

And yet that’s where adventures lay,

To seek anew another day.

So should you ever venture near,

Or wine or tea or your beverage of choice.

I’d love to meet and hear your voice.

Your written words have helped me through

The mush upstairs – my mental stew.

I’m not the only one to be

Confused. You’ve shared your thoughts with me.

You don’t advise or judge or preach,

But say life’s road is there to teach.

I was running out of blogging stuff.

But soon I’ll have more than enough.

While we work out our future’s bugs,

I say thanks again and grateful hugs.

If you have just stumbled on my blog this poem is in response to the outpouring of support, good wishes, hugs and shared experiences on my previous post Confused DNA and our impending departure to parts known and unknown which was alluded to on this post. 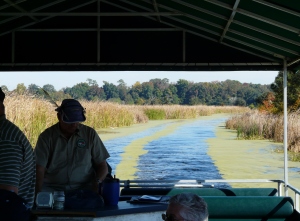 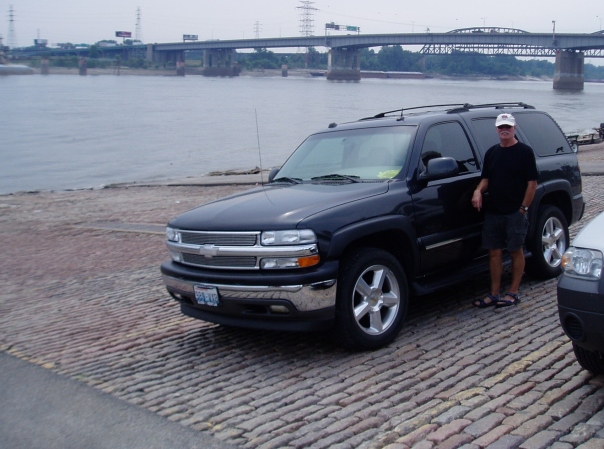 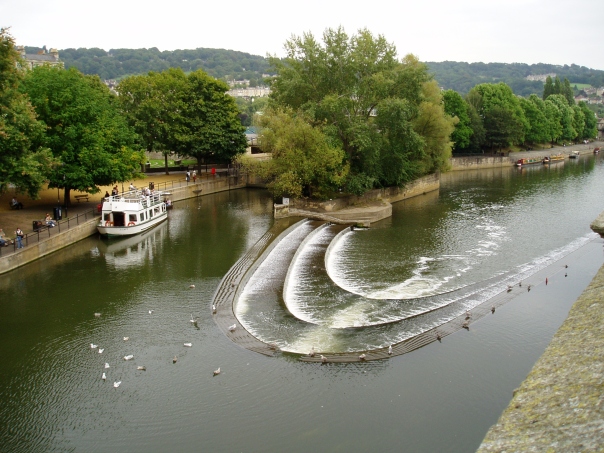 For a bit of light relief from my airport security issues (for you and for me) I have joined in a Travel Theme: Close Up with Ailsa of Where’s My Backpack by way of Hey Jude of Travel Words. All are welcome to join in. Visit Ailsa’s site to see how it’s done.

My close ups hail from Florida, California and Arizona.

Flowers draw my eye and my shutter finger. This orchid in Florida is one of hundreds of flower photos or as himself would say, “More bloody flowers!” 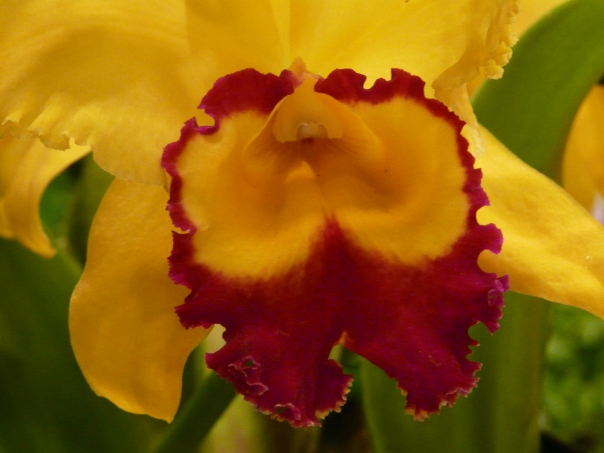 The Portuguese Man O’War is a jewel on the beach but don’t touch!

Who can identify this? it was on a recent post.

Thanks for stopping by.

We’ll be back to the regularly scheduled program tomorrow.

I went hiking for some poppies,

Looking for the perfect shot.

And this is what I got. 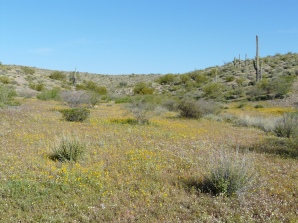 The marigolds were perky.

The lupines were sublime. 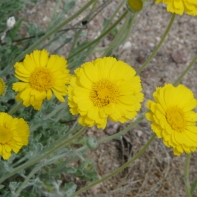 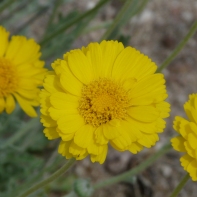 But as for scrumptious poppy shots

It was a waste of time.

Was I looking far too early?

Did I get there much too late?

On my calendar from last year,

This was the perfect date.

Should I go again tomorrow?

Was it the wrong time of day?

They bloom in March and April

But not as late as May.

Did javelinas eat them?

Did coyotes dig them out?

Did tarantulas eat all the seeds?

All of them? Surely not.

A few poppies danced in the wind

And gave some kicks and flicks

But disappointment brought me home

To look at last year’s pics. 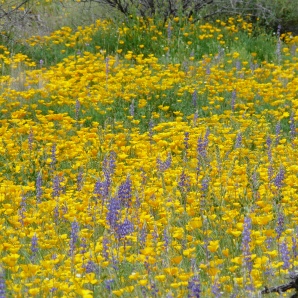 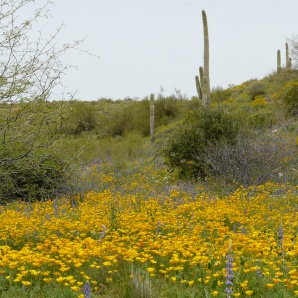 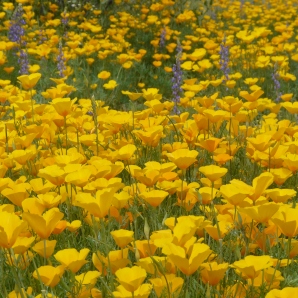 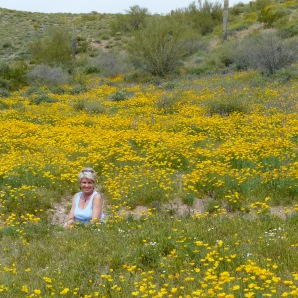 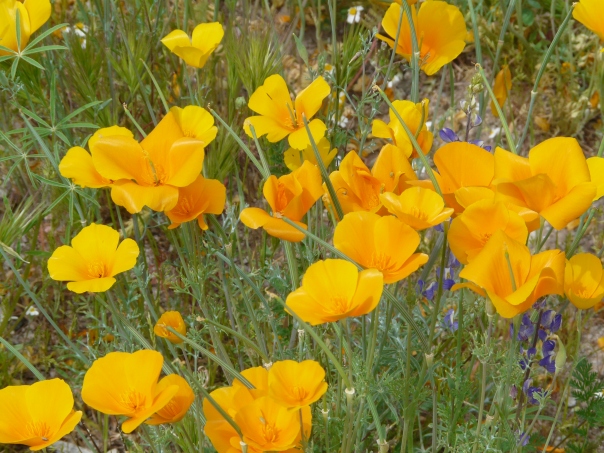 Instead of the balmy east coast summer we’d expected halfway through our second circumnavigation of the U.S. we’d endured gales and torrential rain from Maine to Delaware.

Maine-iancs at the seaside. We were wearing sweaters! 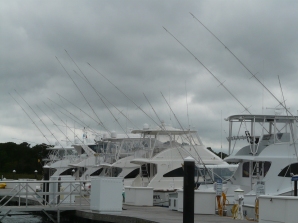 Delaware fishermen are all at the pub. Note the heavy sky.

After a serendipitous trip to the grocery store for dinner fixings and wine, we found ourselves marooned within half an hour of our return as rain lashed down and filled in a moat around us at the Cape Cod Seashore.

The de-humidifier, my special spaghetti and meatballs and a bottle of red wine kept us from caring too much.

Summer turned to autumn while we were in England and on our return we just caught the end of the leaf show on a trip through the Smokies; only a few tenacious leaves had clung to the trees for us. The rest made a carpet of gold for our drive from Nashville to North Carolina.

The southeast coast was unbearably humid for two people used to the weather of a northerly latitude on a par with Calgary. Thanksgiving in Fort Lauderdale was uncharacteristically muggy, as were the Keys where one felt wrapped in a warm wet cloth each time we stepped from our cool trailer cocoon.

Views from our idyllic but sweaty campsite: 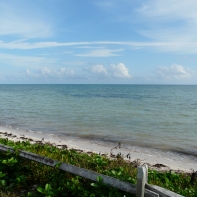 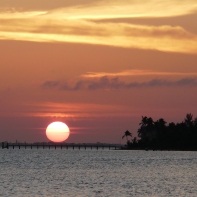 Evenings ‘round the campfire on Long Key, which we felt were compulsory on our sublime beach front setting, became an endurance test. Covered from head to foot and slathered with insect repellant against the sand flies, we steamed as though in a sauna in the stifling night air.

“I don’t think I can stand this!” himself exclaimed on emerging from the air conditioning in full bug-proof regalia.

“No. I’m here now.” The seductive flames were already leaping and I knew he wouldn’t be able to resist sitting and staring at them. Our bodies would slowly warm up, become clammy and acclimatize.

Lighting a campfire in the sultry heat of the Keys was ludicrous, but bites and sweat apart, the night sky, the low rumble of the surf and a backdrop of firelight reflected on the ocean was enchanting. Shooting stars, satellites and one sighting of the Hubble were our entertainment,

“There! There!” until the sand flies penetrated our defenses and we dived into the cool depths of the trailer.

From the time it took us to get from Key West to Destin on the Panhandle, the temperature plummeted and in “tropical” Florida the iguanas, torpid with the freeze were dropping out of the trees like they’d been shot. They weren’t dead. Apparently they’d come round and amble off once the weather warmed up.

We shivered through Alabama, Mississippi, Louisiana, Arkansas and Texas. Tumbleweeds hopped around our fenced in campsite all night at Amarillo, with one giant tumbleweed landing at our door in the morning. Like daft tourists we each posed next to it, shivering, for a photo. 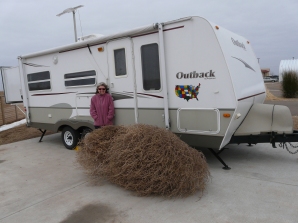 It was at this point that we’d planned to include Nebraska in our tour and see the sandhill cranes at the Rowe Sanctuary on their migration north but atypical cold and snow kept us on a more southerly route.

We were only 500 miles away. Good decision? There was more disagreeable weather to come.

The diagnostic testing was inconclusive so there is no treatment plan. Derek is slower than ever and I can only conclude that he’s sulking. The tech was too kind to say but my diagnosis is senescence as many of you have suggested although there was a degree of prejudice against his kind where a preference for an Apple exists.

Derek will be destined for an old people’s home while I find a toy boy, technologically speaking that is, but until we decide Which Way Now – USA or Europe – we will hang on to Derek as well as Bill and Bob the naughty 2G phones that refuse to play with the new cell phone tower next door.

Derek thanks everyone who has shown concern for his welfare but has been quite distressed at the number of people who feel I should trade him in for a piece of fruit.

Now he’s been mesmerized by this slide show of white-tailed deer at Ochlockonee River State Park in Florida:

For those of you languishing in the Keys: 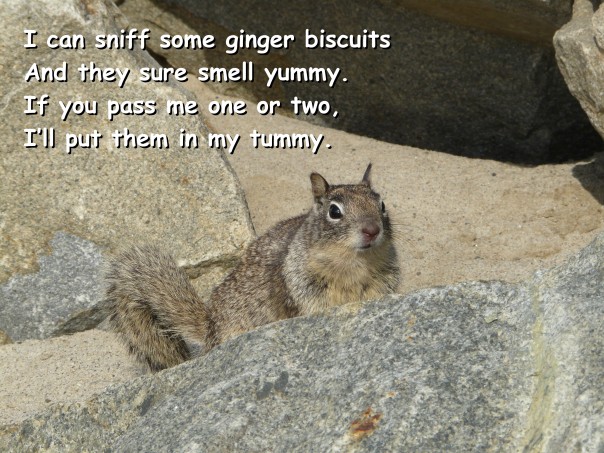 I can’t think why I’d been baking when we were camping at the San Clemente State Park on the beautiful southern California coast just south of Los Angeles but the scent of ginger had caught the attention of the local residents.

Where is that delicious smell coming from?