Sunset in the Florida Keys for the rule of thirds challenge:

And for the effect of bokeh, a focal point leaping out from the blurred background, Larry lizard peaking out from a palmetto leaf at Magnolia Plantation, Charleston, South Carolina:

Being so far from friends and family, I find it hard to get into the Christmas spirit.

Suddenly on the 24th of December, I was overwhelmed with the urge to decorate – less to do with sitting in a Wal-Mart parking lot, more to do with it being my last chance to buy pretty lights. Our campsite was miles from anywhere and a later change of heart on Christmas Eve would not be appreciated by himself.

Normally she who hesitates is lost but Jimmy sensed the battle raging in my tiny mind and nudged me into action. “Go on. See if they have any lights left.” It doesn’t take much to convince me to shop.

Wal-Mart had hundreds of strings of lights left. As I fretted about the oversupply of cheap merchandize, waste, want and greed, I reduced the U.S. problem of overstocking by picking up two strings of 100 lights each, a nasty, scrawny, fake wreath and a big red bow – total purchase – $8.00.

As we drove “home” to our ocean front campsite at Hunting Island, South Carolina,

I strategized best use of my meager haul – two 23-foot strings of lights and a wreath best viewed from a distance. I would wrap the wreath with one string of lights disguising its hideousness, hang it centrally on the awning which was furled up against the trailer and drape the other lights across and down either side. It would look wonderful.

I manhandled a fistful of bulbs round and through the sad little wreath, mangled the red bow into place and attached a twist tie. With “Rockin’ Around the Christmas Tree” rockin’ around in my skull as it had been ever since the morning when himself had put the CD on to cheer me up, I stepped outside to find that a) it had got dark, and b) the top of the awning was completely out of reach.

In times of crisis, when I am about to plummet into misery, Jimmy comes through and suggested he back the car up to the trailer so I could stand on the tailgate.

The previous day, Jimmy had zigzagged the trailer back between awkwardly positioned pine trees and abandoned it in the woods. Now he had to back the car in the dark through the same trees, picnic tables and numerous pieces of lawn furniture, bringing the car at a 45° angle to the center of the awning so I could step on to the rear quarter bumper. The bumper needed to be within six inches of the trailer.

I needed to be behind the car to guide Jimmy in – either between the car and the trailer for precision signaling, or standing off to the side for safety. The former seemed the better option for marital harmony as the accelerator on the automatic gearbox has a kind of all or nothing touch and visions of, not sugar plums, but a bashed in trailer danced in my head.

With minimal screaming, the car was maneuvered into place and Jimmy heaved me up onto the bumper with my hands full of wreath and lights. Arms stretched up to fullest extent and holding the wreath in place, I attempted to attach the wreath to a canvas strap on the awning, using one hand for the twist tie. Put a plastic bag on a table and try to twist tie it closed with one hand and you will grasp (or not) my predicament.

Much grunting and sighing on my part and stoicism on Jimmy’s part got the fortunately lightweight wreath tied to the awning. It only remained to drape the attached lights over the awning. Jimmy offered to back the car twice more to each end of the awning but my nerves were shot from the first backing episode and my holiday spirit was waning. I wasn’t willing to risk damage to the bodywork of the trailer for the thrill of some cheap twinkle lights. His caramel chocolate bar Christmas Eve present wouldn’t make up for a big dent.

We improvised by using the awning hook to try to thrust the lights into place, but try as we might the lights just wouldn’t stay up. Neither of us could reach to tie the lights up. I couldn’t see what I was doing anyway and it was getting late.

The lights hung dejectedly from the dumb wreath in a stupid twinkling puddle on the ground.

I took it all down, the scraggy wreath was stripped of its lights and hung back up while the car was still acting as a step stool.

As I wound the lights up, I cautioned Jimmy, “Be careful of that fire ring” – a three foot across, eight inch high steel ring and barbeque grill.

Well wouldn’t that have just made it a Merry Christmas if he had run over it and burst a tire?

It was right in front of the car and I don’t know how he backed the car into position without seeing it in the first place.

We set off on foot on the nature trail at Magnolia Plantation to hunt ‘gators after a wasted boat trip where the captain/guide nudged all the alligators into the water rather than slowing down for a viewing. “Do you think we’ll see any alligators this early in the day? It isn’t very hot yet.” Alligators, being cold-blooded, don’t hibernate but aestivate, or lie in a state of torpor during extreme heat. Jimmy and I aestivate after lunch most days.

“Do you really think this is safe?” The impatient tour guide had informed us that alligators can swim at 15 mph, run on their little stumpy legs at 35 mph and using their tails, jump up to five feet. So once you’ve upset them . . . hmmm . . . rip and swallow, rip and swallow we’d been told. If a turtle can satisfy them for a month, a human “bean” must be good tucker for at least six months. “I wonder how recently they’ve eaten?”

The day before, I had seen a man gamely striding around the Plantation on two artificial legs. The image of him and the size of the alligators’ toothy, bone-crushing jaws played on my mind. Being one of the oldest reptiles on the planet, alligators are certainly survivors and I didn’t fancy my chances in a face off. “Do you think we’ll see ‘Big Red October’?” He’s the 50 year old resident of the estate measuring 14 feet long and weighing 800 pounds. “They told us there’s never been an alligator fatality in South Carolina.” 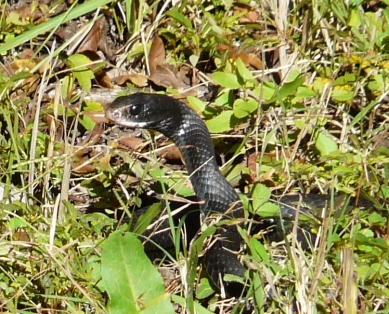 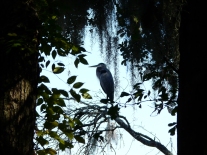 Beginning to jabber with nerves, I distracted myself by photographing egrets, herons, turtles, coots and moorhens, having completely forgotten that snakes were known to nest in logs near the trail – some of them, like the cottonmouth, being poisonous – until Jimmy reminded me. I then tiptoed prissily down the center of the wide, well-trodden path.

As we walked the nature trail alongside the pond, all the strategically placed basking planks in the pond were empty except for the tantalizing snacks of turtle perched on the ends. Having taken a particularly pleasing photo of a cormorant with his wings outstretched, drying them ready for his next fishing expedition, I began telling myself that all was not lost; it was a lovely day for a walk and I had some good photos to show for it.

I was just beginning to stroll as we rounded the bend onto the straight piece of trail where the camera battery had died. This, it suddenly occurred to me, was where we had seen most of the alligators the day before. The basking planks, like little ski jumps, were aimed towards us so we were unable to see anything until we walked further and alongside them.

“LOOK!” and I throttled Jimmy as I grabbed the binoculars hanging around his neck. The telltale triangular ridges of the ‘gator’s back were just discernable to the naked eye, but I wanted to be sure so squinted through the binocs. “There’s one! There’s one!” but Jimmy was snugged up too close to me, tethered as he was by the binoculars’ strap, to see anything but my ear.

Will he hang on until I’ve had my nap?

As we hustled along the path, two alligators were clearly visible on planks erected 30 to 40 yards out in the pond. “The light’s wrong. The sun is shining into my lens. I need to walk further down and shoot back at them.” But I fired off a couple of “rounds” at them anyway in my excitement.

Jimmy paused while I took the photos and then began to stride off when I snagged his arm and sank my fingernails into it. “Lo-o-ok,” I barely said on a breath, and Jimmy followed my gaze with his eyes. No more than three paces ahead lay a 10 foot alligator dozing happily in the mud beside the path. Had Jimmy walked on, she (well she reposed in a languidly female way) could have taken his leg off at the knee with hardly a twitch.

Jimmy reviewed the situation while I snapped a few more pics using my zoom lens. My feet were rooted to the spot. Caution held me back but stupidity kept me there. “We can get back to the plantation house this way can’t we?” asked Jimmy, indicating the path past Ms. Jaws.

“I’m not walking past her.”

“She’s asleep. She won’t bother you.”

“Nope. I’m not getting any closer.” After a close encounter with a buffalo at Yellowstone, I’d become a little more wary, although at 35 mph neither of us had a chance even now if Ms. J. had decided it was lunch time. She was sleeping prettily with her mouth closed but I knew 70 some teeth lurked inside her enormous head so I zoomed in on it for one last shot, then backed prudently away and Jimmy followed suit.

As we retreated, we passed several smiling hikers, cameras in hand, striking out on the nature trail. I had thought to warn them of the alligators but then thought heck, let them make their own fun!

National Geographic won’t be breaking down my door with a contract to be their intrepid new nature photographer but I do have a rather splendid photo of a cormorant doing his batman impression.