The embarrassing wreath I described in this post had been consigned to a dumpster, but I hadn’t given up on the puddling and exasperating lights.

We had made a carelessly arranged Santa’s grotto by plugging in a string of lights and hanging them ’round the bed – the bed that is in our sitting room/dining room which is in the kitchen. The soft glow of the little lights had a kind of artless charm.

But our cozy grotto had to be dismantled each time we moved campsite, which was frequently, as we had neglected to make reservations at this we-now-know busy time of year.

New Year’s Eve was spent at a campsite where you would not choose to go intentionally and the lights did not put in an appearance.

On New Year’s Day we arrived at Henderson Beach State Park on the Gulf coast near Destin. It was a sunny but sheltered site where we could pull out the awning. When I say we, I mean I busied myself with the awning and Plan C for the lights while Jimmy fiddled around with inconsequential things like unhitching the trailer from the car and plugging us in to the mains and water. 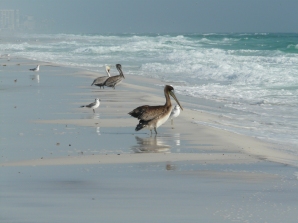 With the awning extended and pulled down where I could reach it, I wrapped the lights around one strut, strung them across the top of the awning and then down and around the other strut. I hadn’t anticipated needing to open and close the door, so had to take down and rearrange all 46 feet of lights so I could raise the awning a little.

That accomplished I waited for darkness. Very pretty.

The next day thunderstorms were predicted and as we were going out for the day we had to furl up the awning. So the lights came down. But never mind. I strung them through the bushes next to us. Very pretty.

The next day the park ranger came to our site to tell us that we couldn’t hang the lights from the vegetation. But never mind. I took them down and strung them along the washing line next to the trailer. Very pretty.

The next day we had to move the trailer to another site within the campground. Of course the lights had to come down. At the new site . . . well the washing line post was a long way from the trailer, but I hung them up anyway, looping them right across our campsite so they were dragging on the ground.

But never mind, it was Twelfth Night, so I took them down.

Happy New Year to all my friends, relictives (haha) and bloggy pals.

Wishing you all a happy, healthy, prosperous and peaceful new year.

When first in the U.S. we mistakenly scoured the local news channels and local papers for world news. We saw items on food safety inspectors finding armadillo meat and live frogs for sale in a market, a “Bodies” exhibition in Seattle with “real human bodies” the real news being that someone stole a kidney from the biology demo. “Sewer project interrupts residents’ lives” was a headliner and a page of national and international news had a lead item of “Long overdue book is back at library.”

Seattle is unconventional and cosmopolitan, Tacoma is more blue collar and Olympia is, to be kind, liberal, but really just a little bit “out there” so forgetting our quest for world news, we turned to the wealth of alternative free newspapers in the area – the names of which will give you an idea – “The Stranger”, “Sitting Duck”, “Conscious Choice”, “The Voice of Reality” and “Wisdom of the Heavens, Earth, Mind, Body & Soul” amongst many others. Jimmy and I have come to the conclusion that we are just a teensy weensy bit naïve after reading them.

I had picked up a copy of the “The Stranger” (where a typical advertisement is the Laughing Buddha tattoo parlour where you can “give the gift of transformation . . . get a gift certificate. Hurting Seattle since 1996.”) but didn’t read it in time to enjoy all sorts of treats on New Year’s Eve. The Little Red Studio’s New Year’s Eve Gala offered “beauty, art and the erotic for couples and singles of all persuasions.” The Supersonic Soul Pimps were playing at High Dive. We could have gone to Cowgirls, Inc. for a “fun ass time” with “rowdy sexy entertainment” and a mechanical bull. The rest were too tacky.

The categories were the usual women seeking men, men seeking women, men seeking men, women seeking women and then there was a column for Swingers. Most interestingly the last category was called “??!!”, no words, just “??!!”, which was my excuse for glancing at the page in the first place. After reading them all out loud to Jimmy and alternating between laughter and bewilderment, I’m afraid to say that I felt completely unable to commit any of them to print. It was all too much. I had to go bake a cake, arrange some flowers and try to resume my innocence.