“Ooo! I’ve got to stop here. Turn around. Turn around,” I said like an overexcited eight year old.  “Just five minutes. I’m not going to buy anything.” Who would believe that? Not Jimmy, obviously as a huge sigh escaped from him, but he did turn around and pull up to The Largest Gift Shop in Kentucky.

“Don’t leave me out here too long to sweat to death in the car,” he ordered.

“You could come in.”

“No,” he said emphatically. I knew he’d say that.

On entering the shop a disembodied voice asked, “Do I know you?” There didn’t seem to be anyone there and I made the mistake of turning around to try to make eye contact through heavily stocked glass shelves of rocks, gems and jewellery. 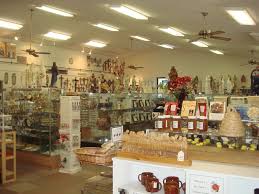 “Have I seen you before?” was her ploy. I peered to see her, surrounded as she was by trinkets stacked high. Although she was seated naturally enough behind the counter, it was as though she had positioned herself at a secret vantage point hidden from the door. As I homed in on the voice I could see long grey hair tightly coiled and pinned flat to her head, an intricate hairdo that said I’m unconventional.

“No,” I answered when I’d given her a good look.

“Have you been here before?” she asked with a quizzical look on her face.

“Have you been to Kentucky before?” she persevered, perplexed that she couldn’t place me.

“No,” I said emphatically, but thinking I’d take part in her game.

“Where are you from?”

“Baltimore.” I said in my best clipped English accent, to throw her off the scent, not sure I should be telling her anything.

She was persistent. “Have you or any member of your family worked for the government?”

“No. Well, yes. The military. Not me, but my family.” Accurate I thought, but brief, wondering where this was going.

“I knew it! That’s the connection! I knew that!” What connection? At this point I didn’t know whether to continue or start backing away, but I stood my ground, smiling tightly at her.

She was well practiced at her art. “Are you a spiritual person?”

“Do you believe in The Lord?” There it is! She had me hook, line and sinker. The hook was the government employee question. They’re the largest employer in the country so between myself and my family I was bound to say yes, but she made herself sound intuitive. The line was the spiritual question. She’d piqued my interest and could see she’d started to reel me in. The sinker was The Lord but as her tiny eyes beamed fervently at me from her sweet, pudgy face I didn’t have the heart to cut and run.

“Were you brought up Catholic?”

Wrong step. One in three people in the United States were brought up Catholic but she came up empty with this bit of fishing. “No.” Economical answer again. Not giving anything away. Go fish.

“What religion were you brought up with?”

Baptist, but I’m not telling you that.  “Protestant.”

Now sensing my reluctance she said, “I’m a spiritual person but I don’t believe in any one religion. Religions have caused a lot of problems. And because of the sins of the flesh, God made childbirth ten times more painful and gave the desire to men. Look at all the problems that has caused.

Where did that come from?

“Have you felt since you were a little girl that you are here for a purpose?” I’d taken a step back at this point, uncomfortable with the whole encounter. Goose bumps popped up on my arms and  in my mind she morphed into Medusa, her coiled hair turning into snakes. “The Lord has a very special purpose for you. You need to communicate with The Lord and He will reveal his purpose to you. I don‘t want you telling me what I need to do. “I knew you were a spiritual person. I could see it in your face, in your eyes. Well, just behind your eyes.”

I‘m trying to picture what is behind my eyes and it is my brain saying get me out of here. “You are a spiritual and very open-minded person. As long as you are open-minded you will learn.” I can go along with that but I’m not going to discuss it with you.

Hearing a slight finality to her comment I rushed in with, “It’s been nice to talk to you,” and retreated. I don’t know why I felt the need to stop, listen and be polite. Perhaps I had been drawn into her spiritual world as her eyes locked onto mine and with mesmeric guile she had rooted my feet to the ground. Had she looked into my eyes and hypnotized me? I couldn’t recall anything of my surroundings after she started to speak except for staring intently at her moist, doughy face, piggy eyes and serpentine hairdo. It was quite a surreal experience – a little spooky and a little comical; I was truly wanting to step away and yet leaning forward the whole time.

“Have a look around. If you see anything you like, I’ll work with you on the price.” I won’t be buying anything. I just wanted to leave and once the spell was broken I took a cursory look round the shop and left. As I stepped over the threshold I pictured the serpents on her head coming alive, her eyes rolling back and sinking into their sockets, her tongue extruding in a black twist to reach across the room and snare me. I only dared say goodbye when one foot was firmly outside and I was pulling the door behind me. I did not break stride. The “connection” wasn’t completely severed until I closed the door and stepped into the sunlight of a balmy Kentucky afternoon. I will only discuss religion on my own terms. And I won’t go back to that shop.

Later in a post office, in a conversation with the clerk about our accents and origins and Jimmy felt he could ask her if there was anywhere nearby we could buy wine. She had just started to shake her head no when Jimmy said, “It’s just beer or whisky here, isn’t it?”

She continued to shake her head no and laughed, “Moonshine!” and we joined in her laughter.

Call me shallow. I’m more comfortable with that kind of casual conversation.

Have you ever had a spell put on you?

And can you read the moonshine recipe on that barrel?