Jimmy survived The Green Card Interrogation– no questions asked – at Seattle Airport having been “welcomed” to the United States by Gandalf.  A harrowing drive in a borrowed truck on Interstate 5 – the heavily trafficked north/south corridor of the west coast – in the dark and in pouring rain was Jimmy’s next ordeal. As we’d already been awake for 24 hours, I was feeling giddy. Jimmy, more used to driving an automatic on the left and now required to drive the unfamiliar pickup with manual gearbox on the right, was feeling completely bamboozled. For good measure he added, “My night vision isn’t so good anymore.” 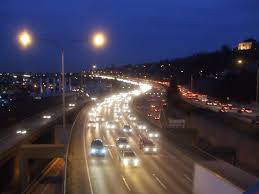 “Oh, that’s reassuring!” A shot of adrenalin jolted me to full alertness on Jimmy’s behalf. Peering as intently as him into a bleak night punctuated with dazzling headlights and blinking brake lights, all reflected in crazy patterns on the slick road surface, I was pumping the floorboards on the passenger side all the way down the Interstate.

When at last we pulled under the apartment parking canopy with a cessation of the thrumming rain on the truck roof, it was with great relief and a measure of amazement that this part of our journey was at an end. We disgorged our suitcases into an apartment we had arranged on a previous visit to Olympia and fell into bed.

The next day, our small two-bed American apartment seemed positively palatial after months of confinement in a trailer. It was fully furnished and equipped – a little treat for our first month until we got our bearings and our belongings in our new country – and we wandered from room to room like novice millionaires inspecting our first mansion.

Deprivation had taught us to appreciate the everyday things we had previously taken for granted so we poked around and played with our new toys – the washer, dryer, microwave, garbage disposal, coffee maker, large screen TV and VCR/DVD and radio/alarm clock (which needed resetting as some bright spark had left it set and it went off at 6 a.m. Cheers, matey).

The monster fridge/freezer (how could we possibly fill it?) was five times the cubic capacity we were used to on our European caravan. The four-ring stove with massive oven, a land line with voicemail, the dishwasher –  it was all exhilarating.

It might be hard for a  normal person (that ship has sailed for me) to imagine how a washer and dryer could provoke such excitement but my undies would no longer share the laundry facilities with dog blankets, greasy overalls and mixed loads of indistinguishable lumps of gray. Each of the ordinary items in the apartment was coveted. The queen sized beds would be blissfully comfortable after our spell on thin hard trailer bunks if only our inner time clocks weren’t eight hours out of sync and we could manage to sleep through the night.

The central heating had a thermostat in every room. For two people with their internal thermostats set at always hot and always cold, to live in a trailer which was essentially one large room had been a constant source of querulous rants. “Turn that heat down!” “I’m freezing!” “Open the door!” “I’ve just warmed up!” “I need some fresh air!” “Well go out and get it!” Jimmy would sit in shorts and a tee-shirt while I shivered under a fleece blanket. The thought of being able to close a door between us and whack the heat up filled me with a tingle of anticipation. Fresh air is meant for outdoors. If himself wants to be an American, he needs to learn that.

These were the first of many adjustments we would make to life in America.

Back to the beginning and the start of homelessness. We packed our four-bedroomed English country cottage into storage and traveled through Europe in a trailer.

Wish you were here?

Ready to leave the snow behind.

We sold the trailer after two years, packed up what was left of our belongings and flew from London to America via Copenhagen. A 10 hour transatlantic flight was endured with two Danish cats across the aisle yowling and peeing all the way.

Empty-headed from last-minute preparations, jet lag and sleep deprivation as well as sad at having given up my previous life in Europe, I mustered enough brainpower to be sanctimoniously pleased at not being the one faced with A Green Card Interrogation. This wouldn’t be the last time I could relax in the relative safety of being an American passport holder on native soil while my other half runs the gamut of being the alien.

I tried to keep up the pretense of being supportive as Jimmy had only recently sprung free of the concentration camp of working life. Forty-two years of long, high stress days had taken their toll on his health. Living in America was his reward. However. The Immigration Officer was going to be his problem.

We were ominously singled out from the long snaking queue of disheveled travelers channeling through the immigration hall in Seattle. Indian saris and African native dresses brightened up the drab, wrinkled mass of humanity. Rich spicy smells and exotic perfumes let me know I wasn’t in line quite yet for Would you like fries with that?

The taciturn immigration official who’d beckoned us to his desk greeted us with “Sit down!” Jimmy’s green card application papers were requested with a glare and a gesture and he poured through them with fierce determination. After a nerve-wracking five minutes and without a word he waved Jimmy back up to the desk. I languished in my chair until he pointed a knobbly finger at me and grumbled, “Her too.”

Here it comes. The inquisition. A marriage of convenience with the spouse as sponsor? He’s going to ask me what color toothbrush Jimmy uses, his mother’s maiden name and the name of his first pet. Did he even have a pet? Unsure of much less obscure facts in my present state – What is your name? Where have you flown from? Are you here for business or pleasure? all tricky questions, I’ve found, when jet-lagged – I got up and stood meekly by, avoiding eye contact with the man who had so far spoken only four words.

He continued to shuffle Jimmy’s papers as though looking for some incriminating information he’d spotted earlier but then said to Jimmy, “I’m gonna take your fingerprints,” and suddenly grabbed Jimmy’s right index finger in a vice-like grip. He inked the digit, hovered it over a form and commanded, “Now relax and le’me do it.” He aimed the finger at the box on the page then backed off and accused Jimmy, “You’re pushin’.” 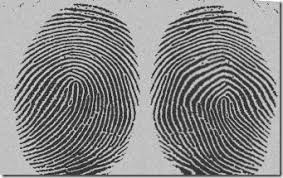 This was the last step in the immigration process for Jimmy that had so far taken two years, hours of pouring through contradictory forms, hundreds of pounds sterling spent, prodding by expensive London doctors, several visits to the U.S. Embassy in London and unnecessary chest x-rays carted thousands of miles.

Mr. Congeniality waggled Jimmy’s hand, shaking his whole arm like a dog with a bone, aimed again, and fumed, “You’re still pushin’.” Keeping my eyes down, I stared at the blank form. Involuntary pictures – hallucinations? – formed in my head. The gnarly immigration officer began to resemble Gandalf from The Lord of the Rings, but without the hair and the beard and the staff and the long dress.

After ten bouts of finger wrestling and with Jimmy’s whole upper body relaxed by the imposed mini Mexican waves, the fingerprints were eventually smeared on the page and the form filling was quickly completed. I never spoke. Jimmy never spoke. We were dismissed with a “You’re outta here.” What a sweetie.