“What?” I asked in the alarm voice that blurts out whenever himself takes a certain tone.

“Well that’s nothin’ for us,” I replied, relieved. “We’re veterans of 5° nights.” Not that I’d ever want to do that again.

“High of 35° tomorrow with snow showers, 20° tomorrow night, then more snow and it won’t get above freezing the next day,” Jimmy read off the computer screen, as a gnawing dread crept back into my stomach. Three hundred miles of Oregon lay between us and Washington State.

We’d had a good run of pretending it was summer right through the winter with October in Tennessee, 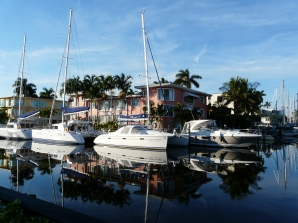 and only coming a little unstuck at the Grand Canyon in northern Arizona with killer colds nights and ankle deep snow.

As we’d traveled east and then west, south and then north, sea level to high altitudes and back, we’d vacillated between using the furnace and the air conditioning, wearing swimsuits and shorts and then hauling out our thickest fleeces. But there were always blue skies.

We were prevaricating in California, unwilling to head back to Seattle for booked flights to England. Out of a sense of puerile self-satisfaction, we frequently checked the weather back in Olympia where we lived for one and a half years. As we (mostly) basked in sun and warmth, Jimmy would look it up and say, “Guess what the weather is in Olympia? Showers today, showers tomorrow, rain on Thursday and cloudy with rain later on Friday.” We took pleasure in our good fortune.

Our plan to hang out in the good weather for as long as possible and then tow the trailer 600 miles in two days needed revising. Roller-coaster-ride roads frosted with snow and ice were ahead of us. Jimmy is the wagon master so showing great camaraderie under duress, I locked myself in the bathroom with a cup of tea and my makeup box to let him figure it out.

The fan heater and radio were both on and I couldn’t make out what he was saying through the closed door. “I can’t hear you!” I bellowed, too idle to turn and open the door as I was in the middle of the delicate process of matching one eye to the other with a rainbow assortment of eye shadow.

The whole trailer then wobbled as Jimmy trotted from the dinette to the bathroom door (all of three steps) to shout through the door, “We don’t have to worry! I thought I looked up the weather in Salem, Oregon, but I looked up Salem, Sweden.” Then we both giggled.  “There’s no snow or freezing weather in Oregon.”

He’s usually quite precise but sometimes I feel like a mum who should be checking Jimmy’s homework.