From an email to those back “home,” wherever that is.

I can’t quite believe we’ve made ourselves homeless for a second time. The first night in our new “home” has just hit me after the anxiety of moving out of our apartment. There will be no going back to comfort: long hot baths, endless running water, a forceful toilet that doesn’t store its contents for us to deal with later, a dishwasher, washing machine and dryer, thick pile carpet, rooms with doors that slam satisfyingly when annoyed, ample electricity (Ha! Lots of amps. Geddit? ) a swimming pool and space – lots and lots of space. Even a two-bed apartment seems roomy now compared to our all-in-one bedroom, dining room, sitting room and kitchen, with a bathroom in a cupboard.

We stuck it out for a year-and-a-half in Washington and witnessed torrential floods which caused millions of dollars in damage, wind storms prompting kamikaze conifers that took down electricity lines and left us in darkness, and day after day of grey skies, cool temperatures, drizzle, showers and cats-and-dogs rain.

The weekend we chose to move out of our apartment boasted sunny skies with a temperature of 101°F. Unhelpfully, a neighbour commented, “At least it isn’t raining so you get all your stuff wet.” Well we didn’t think of it in those terms when drenched in perspiration as we packed boxes and half dead with the heat we got a bit snappy with each other.

“Do you have to stand there? I can’t get past.”

“I’m standing in front of the fan.”

“No.” And that was that. There was no more energy to argue.

Now our second lot of big “stuff” is in storage and our trailer is crammed full of little stuff, not necessarily stuff we want but what was left after the removal guys took away our carelessly packed boxes. Tomorrow we’ll drive along the Columbia River which forms the border between Washington and Oregon. We’ll cover part of the Lewis and Clark trail, only in slightly more comfort than them (central heating, hot and cold water, sprung mattresses, a gas cooker, a toaster, paved roads, a vehicle with an internal combustion engine, reliable maps albeit with an unreliable navigator) when they wintered there in 1805/6 having trekked from St Louis to the Pacific.

As I lose the skin off my knuckles once again making up the fiendish bed I am unable to appreciate their hardship.

No one told us they have monsoons in Washington before we naively moved there from Europe. November had been a record breaking month for precipitation and December looked set to be worse. What could be more terrible than wading through three inches of water to get to our car? We were about to find out.

As forecast, gusts became more fierce and whistled through the towering pines throughout our development.
We watched the 11:00 news before going to bed and gusts were then predicted at 90 – 110 mph; 5.7 inches of rain had fallen in Seattle that afternoon; there were mudslides, trees down, roads blocked, bridges closed, flood warnings, blizzard warnings, thousands of homes without power, drivers killed by falling trees and a woman rescued from her flooded basement by divers. People trapped in their cars by flood water had to be rescued; the Amtrak train just quit; Qwest Field where the Seahawks were trying to play football was shown with waterfalls cascading down the steps; the reporter on the coast said it was raining so hard it hurt just to stand in it and there were 30 foot seas. A house was cut in half by a 140 foot tree. It had been the largest black poplar in the northern hemisphere and now it was blocking Lake Washington Boulevard.

We went to bed on the gloomy note the worst is yet to come. As we had not yet been affected by the calamitous weather and were cocooned in our apartment, we still felt there was a degree of media hype in the reporting.

The next morning the apartment was ominously cool. I turned the thermostat and nothing happened. I tried a light switch and nothing happened. When the stove failed to heat up we both had the same reaction – no tea! What a couple of bubbleheads. Everything ran off electricity in the apartment and we hadn’t even begun to think through the consequences.

After a cold breakfast we set off for IKEA but found to our amazement that it was closed due to the power outages. Having driven for an hour on the tedious interstate Jimmy didn’t know whether to be put out or pleased at not having to traipse around IKEA’s intentionally baffling layout.

On our way home we decided to hunt for firewood and some dinner. There was a modicum of warmth left in the apartment so we ate our tepid teriyaki chicken by candlelight and proceeded to light a fire in the fireplace. This went well for Jimmy despite constant interference from me until he decided to shut the damper down to try to preserve our one bundle of firewood. The apartment filled with smoke.“You need to open the damper.”

“No it’s not. You just smell the smoke that already came out.” 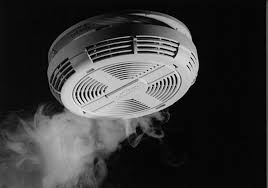 We had set off all the smoke alarms in the apartment. “What do we do now?”

“Can you turn them off?”

I thrashed the fireguard aside and opened the damper fully as Jimmy dashed to the front door and opened it wide to let the smoke, and our precious warmth, out. Cringing under the onslaught of the alarms, the bleeping became intermittent, then stopped.

Just as we exhaled in relief, fire sirens started up in the distance. “Are the alarms connected up to the fire station?”

“Do you think they are coming here?”

“I DON’T KNOW!” We stood fixed at fireplace and door, gawping at each other as the sirens became louder and louder and louder . . . then quieter and quieter as they raced off to their real emergency. The fire in the fireplace was short-lived, we saved a few logs and went to bed early under all the blankets we could find.

Saturday dawned late – foggy, cold and bleak. We’d been without power for nearly 48 hours and were forced to contend with other unprepared residents over the dwindling supplies of firewood.

Later we had a pleasant evening in front of the fire drinking wine, playing Rummikub, a board game like rummy, and cheating wildly as the different numbers and colors on the tiles were indistinguishable by flickering candlelight.

The mathematical thought processes necessary for the game became increasingly difficult with each glass of wine so we gave up and were gazing into the fire.

“Would you want to know when the power is going to come on again?” Jimmy asked.

“That depends on whether it’s tomorrow or next Friday. If it’s next Friday I’d rather not know.” We continued fire-gazing.

“Do you hear that?” Jimmy asked me.

“The fridge. THE FRIDGE!!!” and I jumped up and bounded round the apartment like a jackrabbit on steroids. I flicked a light switch, “YES!” then cranked up all the thermostats, plugged in the Christmas lights, put the light on over the stove for a homey kitchen glow, turned the spotlight on the wreath over the fireplace for seasonal cheer, then touched every warm heater vent in the whole apartment in a very proprietorial and self-satisfied way.