I should just have been pleased that it wasn’t me facing an inquisition from the Border Patrol.  Himself is living in the “foreign” country now.

For all the years I lived in England I had to get in the long queue with all the other refugees in Europe at airports and immigration checkpoints. I’ve had my passport thumbed, queried and stamped and my face peered at with alternate glances at the passport photo that bore no resemblance to me after my most recent trip to the hairdresser.

I struggled to answer difficult questions coherently when sleep-deprived after a night flight. “Where have you flown from?” That one always threw me.

“Ummmmmm. Baltimore.” It was already a world away and seemed a lifetime ago.

“What? Oh. Yes.” Pause. Expectant look. If he’d wanted more information he should have asked an open question.

“He’s standing behind you.” And had been for come considerable time as he’d queued with the privileged, waived his British passport at some checkpoint Charlie person and loitered on the suspicion-free side of the immigration desks waiting for me.

Living in a foreign country (that would be England) I’d endured laughter at my American pronunciation, tolerated asides and jokes and subtle references that were rooted in the English consciousness from 30 to 40 years ago. I was often the only one who didn’t “get it.”

“I’m Julian and this is my friend Sandy.” Uproarious laughter from himself.

“From Round the Horne.”

“You mean in the olden days when they called it the wireless. You know I didn’t live here then.”

Now it’s Jimmy’s turn. He’s the foreigner and I frequently say to him, “Oh, yeah,” in an off hand, of course! tone of voice when he queries the little nuances of life, customs and history in the U.S. I can quote the first few lines of the Gettysburg address for whatever good that does me. I’m not proud of this but I can sing along to the Mickey Mouse Club lyrics. I can say, “You remember Foster Brooks don’t you?”

“He always played a drunk.”

“That skit with Dean Martin.”

I now have to translate American into English for himself:

“Spackle. You know, polyfilla.” or “You can stop laughing. Fanny is not a rude word here.” or “The guy won’t know what a spanner is. It’s called a monkey wrench.”

English, as she is spoke in America, has to be repeated to himself when his ear is not tuned in to American English as mine wasn’t to the Queen’s English.

I’m not wanting him to be in a predicament like the time I had to get off the coach bound for Paris from England. I was the only passenger with an American passport. All my fellow passengers cheered when French Immigration let me reboard the coach after the interrogation. They thought it was funny. I did not.

I’m just glad I haven’t got the feeling of being the odd one out any more. 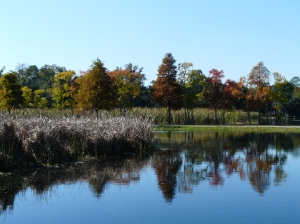 After ascertaining that it would be safe to walk back to the ‘gator pond  at Magnolia Plantation (it was a designated wildlife trail after all) we fixed on a nine o’clock start for the morning so that we could snap the alligators (snap, ha!) and then “do” Charleston in the afternoon. Finally getting away at 10:15, we turned up at the boat dock, last to board and huffing and puffing, to be greeted with “You English?”

“Well this is what you would have had,” the tour guide said with a grand sweep of his arm, “if you hadn’t been so greedy.” Jimmy and I exchanged puzzled looks and didn’t put our minds to his comment until much later when we realized that he had been talking about British taxation in the 1700’s and the American War of Independence. Charming man! Jimmy muttered to me, “Nothing’s changed then,” referring to current exorbitant taxation in Britain.

Memories are long in the South. The not-very-civil American Civil War is still referred to as “the recent unpleasantness” and the British are obviously still a target of derision for some people nearly 250 years after the Revolution.

Prince Not-So-Charming seemed to be having an off day as he puttered his passengers around a pond that had been “built” by erecting dykes filled with “sweet” or fresh water. Sweet water is siphoned off the top of the high tide when the salt water sinks to the bottom as the river ebbs. Used originally for hunting and fishing on the estate, the pond is now serves as a conservation area. Duckweed formed an unbroken surface on the water which looked like a bilious green carpet sturdy enough to walk on, but we easily cut a swathe through it leaving a wake of clear dark water behind us.

Ms. Excitable here sat front and center pointing out all the wildlife as Prince N-S-C had informed us, “You do the lookin’. I’ll do the talkin’.” True to his word, he cruised quickly past several basking alligators on the outbound trip, not even giving us a chance to lift our cameras, while he droned on and on. Then he nipped so close to the ‘gators on the way back to the dock, he startled them into the water so none of the passengers got much of a look – just heard the plop.

We arrived back at the dock after half an hour of a supposedly 45 minute trip. My photos were few and out of focus, out of frame or just plain boring. We saved ourselves the expense of a tip for the indifferent tour guide, but we would have to hunt ‘gators on foot.

Could this be my most dimwitted plan yet?

Posted this at 6 am then hit my own like button. Speak of dimwitted!