Back to the mountain and our journey to Garryowen. Jimmy’s eyes were bulging and arms straining as he leaned into the slope as though he was pulling the trailer up the mountain with a strap on his back. “My foot is on the floor. I don’t have any more gears!” he fumed as I slunk lower and lower in my seat. The route I’d chosen looked flat on the map. We crawled up to the snow-line and the temperature plummeted from a balmy 70°F to 40 degrees. With each twist of the road to the right, I could count the members of our procession in my door mirror. Before we could pull over we had accumulated eight cars, a motorhome, a pickup truck with trailer and five motorcycles – all following at a stately 10 miles per hour. How they must have enjoyed the opportunity to appreciate the scenery.

As we rose up out of the tree line we emerged into beautiful alpine meadows of wild flowers just as they were giving their short burst of summer color. Sweeping vistas for miles and miles to the horizon across the Bighorn Basin – once, millions of years ago, a sea bed – appeared and disappeared as we crawled up and up. “We’re at the top!” I cried again and again, hopefully, as each bend ahead appeared to be the last, until rounding it we could see yet another long loop of road – up.

As the air outside cooled, the engine temperature reached a record high. Thankfully, for me, the “Elevation, 9,430 feet” sign – matching the small print on the map I then saw – appeared before our car and my driver simultaneously combusted. We found a scenic turnout for a cooling lunch stop.

If I thought I was off the hook when engine and driver had chilled, I soon discovered that mountain passes don’t just go up to the top and then down the other side. Setting off once again, Jimmy commented “We seem to be doing an awful lot of steep up and not very much down,” oblivious to the fact that the descending miles flew past as he became a downhill racer hurtling ‘round bends.

The road was, thankfully, cambered but there was no guard rail on my side – a vertical drop to sure death – just dinky, little, single chevron signs > > > proclaiming the bleedin’ obvious as my speed demon careened down and around another hairpin bend.

On one steep descent, I got a swift glimpse of a brown information sign. “That sign just said that the granite here is 2.5 billion . . . no it can’t have been billion.”

Oh, Lord, save me. He’s reading the tourist signs.

“Whoa! Whoa! Whoa! Whoa! Whoa!” Jimmy shouted, with a devilish gleam in his eye as he stood on the brakes and hauled us through a more than 180° loop of this rollercoaster ride. “There’s a lot of weight in the back when you’re going down hill,” he told me, grinning.

“Have you only just realized that?” I asked a little hysterically.

Then suddenly we were in the little town of Ranchester, traveling on a flat, straight road at a sedate 25 miles per hour. There were no cars in this western town, only pickup trucks and Harley motorcycles, and the finest building in town was the Cowboy State Bank.

Soon we were thunk-thunking along on an old, concrete stretch of interstate – from downhill adrenalin rush to flat tedium within a matter of minutes. After exiting the highway, we needed to drive three miles south on Frontage Road – only there were two Frontage Roads, one on each side of the highway. Naturally we took the wrong one to a dead-end. 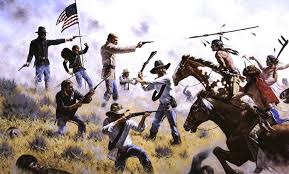 Now that we’ve been to the site of Custer’s Last Stand I really don’t know what to make of the man. I’m tempted to say that he was a bigoted, blood-thirsty glory-seeker doing the bidding of unscrupulous politicians, but what do I know.

At the campsite we parked on a high bluff, overlooking the countryside. Jimmy’s driving must have repeatedly opened and slammed shut the cupboard doors in the trailer as it leapt behind us. Teabags and ginger cookies littered the floor on arrival at four o’clock – tea time. How appropriate – an invitation if ever I saw one. We had a good view of the interstate while we drank our tea and could hear the freight trains all night. We felt right at home.

Oh, and the journey was 190 miles zigzagging through the mountains, not the 140 mile easy route on a flattish road Jimmy had chosen. Oops.

“The next time I choose a route, we’ll go that way.”

“I know,” I said contritely.

“I don’t want you to interfere.”

”You can’t leave anything alone.”

“I expect the other way was shorter as well.”

“I can’t turn around now. The engine is overheating. I can’t even stop on this steep grade. I’m afraid we’ll never get going again. I don’t even know if we’ll make it to the top. What will we do then? I can’t reverse down the mountain. You had to . . . .”

“Awright! Awright! Awright!” Any little inkling of contrition I had felt was seeping away with this barrage, despite it being (possibly) justified. Jimmy’s estimated “easy” 140 mile leg of our journey towing our travel trailer to Garryowen had turned into a mountain climbing expedition. Our V8 engine was happily slurping gas as it whined uphill in first gear at 10 miles per hour towing 7,500 pounds behind us.

I had simply looked at the map before we set out from Cody, Wyoming and saw what I thought was a more direct route than Jimmy had chosen to Garryowen, neglecting to notice the tiny symbols denoting the Bighorn Mountains. They bisected our route with the road peaking at a summit of 9,430 feet while skirting Bald Mountain at 10,042 feet and Hunt Mountain at 10,162 feet. Also, the Closed in Winter designation should have been a hint that it was going to be a tricky road, but I had only judged the distance with a quick glance. A flashing yellow sign warned “Steep Grades Ahead!” some time after we had set off but I kept schtum hoping himself hadn’t seen it. We were already committed.

A little background to these little known western towns. Cody is named for William Cody, better known as Buffalo Bill, apparently the most famous American at the turn of the 20th century. He was by all accounts a splendid chap – handsome, smart, a family man (though is rumored to have had an affair with Queen Victoria), enterprising, heroic – and used his superior shooting and horse riding skills to produce “Buffalo Bill’s Wild West Show” which toured Europe and America for 30 years. Appearing in his show over the years were Annie Oakley, of sharp-shooting fame, Calamity Jane, an illiterate alcoholic and part-time prostitute (did Doris Day know?) and Wild Bill Hickok, a gunfighter whose early demise while playing poker makes me uncomfortable sitting near the door of a restaurant even now. Not that Bill frequented restaurants, but if he’d sat with his back to the wall at the saloon in Deadwood I wouldn’t have this hang-up.

Garry Owen (http://www.youtube.com/watch?v=4m7RPjQxjmA) was Custer’s favorite marching song and now is the name of the only town within the battlefield of The Battle of the Little Bighorn or Custer’s Last Stand. It is little known that George Armstrong Custer was the George W. Bush of his day – a lousy student at uni and a questionable military strategist. George C. graduated bottom of his class at the United States Military Academy. George B. was an average student at uni and was accepted into the Texas Air National Guard with the lowest possible passing grade on his written aptitude test. George C. arrogantly (can be interchanged with overconfidently, patriotically or zealously depending on your point of view) attacked an encampment of Sioux and Cheyenne Indians under the overall command of Chief Sitting Bull. Instead of waiting for reinforcements, George C. was wiped out along with over 200 of his men by 2,500 Indian warriors. George B. . . well you know that sorry tale.

We will return to our badly planned mountain climbing expedition in the next exciting instalment!

For my followers: We’re back in the USA, but I’m sure you noticed that.

© Which Way Now 101, 2012-2013. Unauthorized use and/or duplication of this material without express and written permission from this blog’s author and/or owner is strictly prohibited. Excerpts and links may be used, provided that full and clear credit is given to Which Way Now 101 and whichwaynow101.wordpress.com with appropriate and specific direction to the original content.
Loading Comments...
Comment
×
%d bloggers like this: