After the traffic horrors I related on Friday, I thought you might like to see Chicago from the sea! 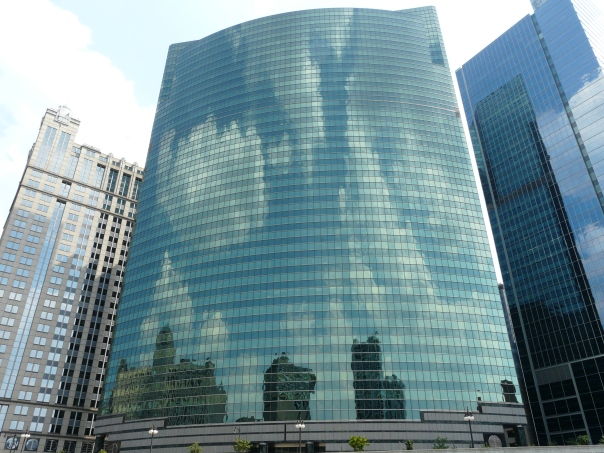 Complicit in the stupidity of towing through a major city at rush hour we’d planned a route through Chicago to a campsite just south of it, changed the route to skirt round the edge of the city, then seeing a straight shot through Chicago on a bold blue streak of Interstate on the map (surely that would be quicker?) changed it back to the original plan.

I captured the moment in a photo of the Chicago skyline taken through the windshield with eight solid lanes of traffic in the foreground.

Who knew rush hour started at 2:30 in Chicago?

Jimmy has an extension on his rear view mirror so can see behind the trailer. I can see nothing behind the car except the front of the trailer. Whenever Jimmy brakes sharply I cringe and hope there is no impact. If the rear of our trailer was smashed, the slide wouldn’t function and our living space would be reduced to kitchen, closet bathroom and bed.

Jimmy is a good driver and usually relaxed at the wheel. When he grips the wheel with both hands and his eyes narrow to slits I tend to sit up and tense up. It was from these postures that the following conversation took place:

“Have we got far to go? I’m getting tired.” We’d been on the road for about seven hours.

“About this far.” I held up thumb and forefinger two inches apart. “I’ll work it out in a bit,” I said evading his question and pointing out road signs, reckless drivers, stray dogs, out-of-state plates, anything to avoid telling him it was another 20 miles into the city center and 20 miles out the other side. At stop/start speed that would take . . . oh, no, I couldn’t tell him that.

To pass the time I read out facts about Chicago. The Sears Tower (now the Willis Tower but Chicagoans won’t say it) at 110 stories and 1450 feet, was the tallest building in the world when it was completed in 1973. Its distinctive square “shoulders” became visible as we crawled along and distracted Jimmy from his ire at our lack of progress.

The Chicago Sanitary and Ship Canal is the only shipping link between the Great Lakes and the Mississippi River. Better known as the Chicago Drainage Canal, it also serves to flush out the Chicago River that runs through the city, sending its sewage (treated, they say) down the Mississippi to St. Louis, Memphis and on to the Mississippi Delta and into the Gulf of Mexico. St. Louis has got its own back on Chicago by bottling the Mississippi water and sending it back to Chicago – as *********. I can’t say that. It’s libelous. It’s just Chicago humor anyway.

Eventually we motored through the city. The campsite was a dump but central Chicago (we took the train back) was modern, slick, dynamic and pedestrian friendly. Who cares about traffic jams when you are on foot.  We picked a perfect, temperate day to visit but with hot, humid summers and extended periods of below freezing temps in winter it wouldn’t be an area for us to live.

A mixture of Interstates, toll roads and states routes took us from Chicago through Indiana, Michigan, Ohio, Pennsylvania, New York, Vermont, New Hampshire and finally Maine. At Ogunquit we spent a chilly day huddled together at the beach (actually at the edge of the parking lot with all the other old tabs who couldn’t scramble down the rocks to the ocean).

I had a nice view of the lifeguards from the parking lot. 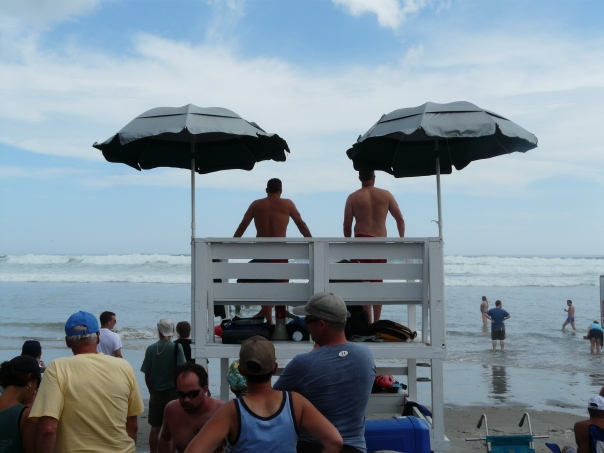 We watched the lifeguard hustle people out of the rip tides, then for his trouble get into an argument with a nutter who insisted he was infringing his right to be in the water. He’d no intention of swimming, dressed as he was in jeans, socks, shoes and sweatshirt. He just wanted to make his point – loudly. From the safety of the parking lot, the retirees murmured with outrage on the lifeguard’s behalf.

Cool, blustery weather greeted us at Cape Cod where we watched the wind surfers from the car, (again from a parking lot, this time the Cape Cod National Seashore). 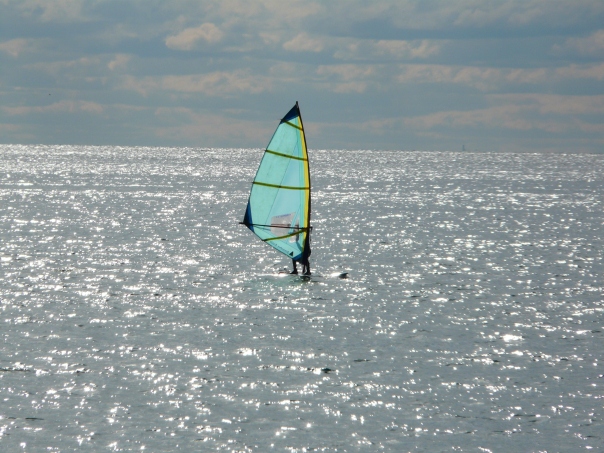 Continuing from Massachusetts, through Rhode Island and Connecticut, New York City (more traffic horrors), New Jersey, Delaware and Maryland on I95 – as the only sensible way to motor south through the northeastern states – we finally abandoned the Interstate to wing our way across to Rehoboth Beach and the Delaware Seashore State Park where gale force winds rocked our trailer for two nights. Jimmy feared we would blow over in the night.

If it seems that we hurtled through the northeastern states, I have dismissed all the states north of the Mason Dixon Line – taken to mean the dividing line between The North and The South – as a potential home purely for reasons of cold winters. That summer didn’t entice us either.

I didn’t lie to Jimmy about the Mason Dixon Line. He still doesn’t know what it is, or care. He is entranced with Florida, Arizona and California.