Do you see that blob with her arm out under the rear stripey sail? That’s me at the helm of ‘Nightwind.’ The photographer was Walter Cronkite. 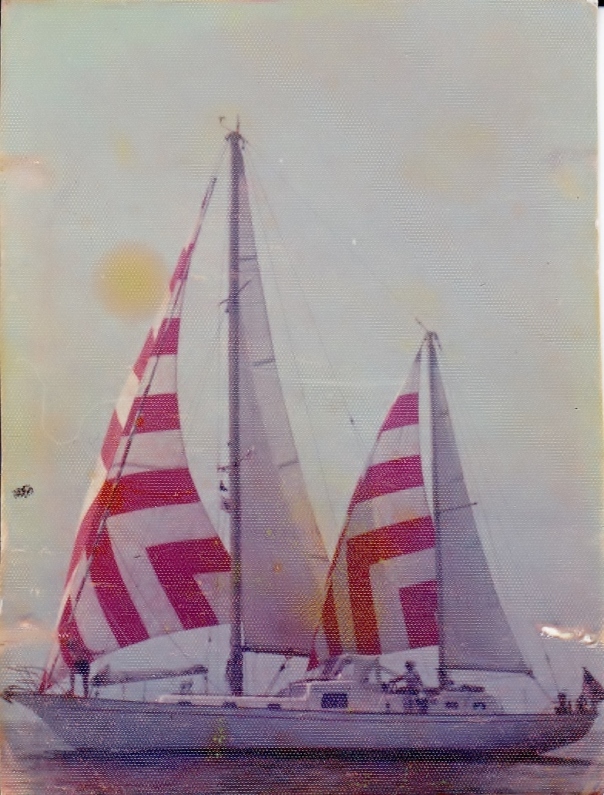 It was the late 70’s and I was crewing on the charter yacht ‘Nightwind.’ Walter came down from New York with his wife, son and friend to spend some down time cut off from the world as this was before the days of mobile phones.

We were ghosting along under a light wind and Walter and the skipper hopped into the dingy to take some rather splendid souvenir photographs of ‘Nightwind’ under sail, some of which he posted to us later after they’d been developed (remember doing that?). Sadly, this one is now faded, scratched and blotched.

An enduring memory of THE Mr. Walter Cronkite was that he would ascertain our destination for the next day and read aloud about it from the cruising guide after dinner. Washing up, tinkering and tidying would halt and the other five of us on board would gather round to listen. I knew the guide off by heart and the islands were completely familiar to me but his sonorous voice, relaxed by his vacation, was mesmerizing. It was his news voice tuned down to a lullaby. What a treat.

I lived Afloat on this boat for two years cruising with charter passengers between Martinique and Grenada. And am still drifting.

If you are interested, or my terminology offends you, the rear stripey sail is the mizzen staysail.

I could have just re-posted Put That Back, a photo of Floating Islands desserts for this challenge, but that seemed a bit lazy.