Like daft tourists, not seasoned travelers, we associated Santa Fe with warmth and sun, but discovered that we had strayed far enough north to be almost in ski country in late winter.

Duh. Hadn’t we learned our lesson on our first circuit of the United States the year before  at the Grand Canyon where we were frozen to the ground in 5°F weather? Apparently not.

The endless summer we had planned – summer in the north, high summer on the east coast, late summer and snowbird’s winter retreat in the south – never happened. Gales, sweaty heat and freezing temperatures made the circuit with us.

Southern Arizona was at least a comfortable temperature until the sun went down. A “nation” of saguaro cactus “people” with their funny arms held up in greeting had welcomed us to Tucson and given at least the impression of a hot landscape.

The dry air, calming buff colors, and peacefulness of the Arizona desert were most appreciated after so much lousy weather and soothed our need for warmth, but our winter sojourn had been meant to entail leisurely swimming and sunbathing, beach combing and sitting in the balmy shade of our awning for the margarita hour.

I risked a couple of “heated” swimming pools, one in Sarasota and one in Tucson. Getting into the cold water (heated means not icy) was a shock. Getting out into the cold air was agony.

Sunbathing hadn’t happened at all and our skin thanks us for that. Beachcombing on the Gulf coast was done in winter jackets while powering ahead. To stand still was to risk windburn and then hypothermia.

For our margarita hour, we substituted red wine “indoors.”

Neither comfortably cooped up inside nor drenched in perspiration or shivering outside was the relaxed experience we had anticipated.

Tucson in March was our first destination since leaving Washington State the previous July (picture a clockwise trip on the edge of the States from Washington all the way around to Arizona) where we could sit comfortably outside or stroll languidly in t-shirts and shorts, particularly galling as Washington had had their best summer in years after we left.

Coyotes yipping in the distance setting off the distinctive yips of several packs of their chums at 3 a.m. the night before had added a thrilling ripple of fear to the spell the desert had cast. Quite unused to this particular wildlife encounter, we exchanged notes the next morning.

“Did you hear the coyotes in the night?” he asked.

“Oh, yes. I went back to sleep and then wondered if I’d dreamt it.”

“They ran right under us. I could hear them pounding back and forth and panting!”

Camped for the night under stately and beautiful but dripping giant redwoods in Crescent City, Jimmy had googled the weather where we were headed. “Do you want to hear the forecast for Olympia?” 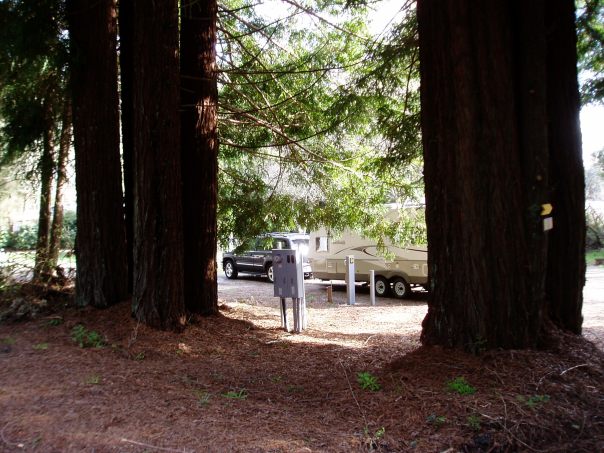 “Rain today. Showers tomorrow. Scattered showers the next day. Wait. Let’s look at the 10 day forecast.” Spare me. “It’s going to rain for the next 10 days.”

How do we cope? Badly.

How do you (would you) cope?