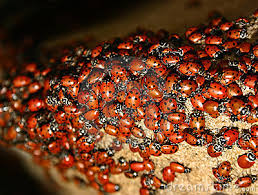 During a recent trip to England, a plague of ladybugs in Tennessee had taken up residence in our trailer and accompanied us to North Carolina, reminiscent of our flies encounter in Washington. Taking it in turns (which we argued about naturally, “There’s one.” “I got the last one.” “I only just sat down! You get it”) we scooped them off windows, walls and ceiling and carried them to the door.

As they were launched into their new state, some did a swan dive and arced gracefully into flight while others took a nose dive and concussed their little heads on the pavement. After placing the next dozen or so ladybugs carefully on the step, I took a hard stance and launched them all, no longer suffering angst over their fly or dive abilities.

A day trip to the Smoky Mountains had been disappointing for the autumn color but in the Blue Ridge Mountains the trees were just about a week away from bursting into glorious Technicolor. We noticed daily changes in the intensity of color and I was waiting anxiously for Jimmy to experience his first full-blown encounter with an American autumn.

Whole mountainsides would be ablaze with flame yellows, ember oranges and dots of hot reds – a sight which is possibly taken for granted by the Americans who see it every year and perhaps think oh, that’s nice but in the words of the mum in the changing room in England with her daughter who was trying on a prom dress, “it’s stunnin’ innit!!”

Looking for  “stunnin’-innit” views we set off full of anticipation for the Blue Ridge Parkway, a winding road that makes its way along the ridges of the mountain range. Gasping with appropriate tourist awe at the trees that were dressed in their seasonal best we had relaxed into our glazed but happy mode saved for when we think we know what we are doing.

So Grassy Knob Tunnel came as a bit of a surprise when the automatic headlights on our car did not automatically come on. Lack of headlights combined with wearing sunglasses meant we were plunged into complete blackness and as Jimmy’s are his prescription glasses, taking them off was not a helpful option. He said . . . well I can’t tell you exactly what he said, but the gist of it was, “I can’t see anything at all.” As he stomped on the brakes and fumbled for the light switch, we heard the impatient blast of a car horn behind us. We told ourselves self-righteously that the car was traveling far too quickly but the fact is the driver was probably quite startled to come up behind a car all in darkness tooling along at 10 mph on a blind bend in a tunnel.

As we approached Pine Mountain Tunnel, I saw Jimmy’s hand snaking discreetly towards the light switch in readiness. He wasn’t about to make another daft-old-man blunder.

It was a perfectly glorious day; Jimmy was delighted (not!) to stop for me every half a mile, at every overlook, along the 40 or so miles we cruised of the three-state-long Parkway so I could take 116 photos of breathtaking views across the valleys, many of which in the photo folder on my computer now look dull, flat and exactly the same. We drove until the sun started to dip in the sky and then turned ‘round to retrace our steps so we could view it all again in the soft afternoon light and return to our trailer. Easy, yes?

You probably know the answer to that by now.

Don’t like to drone on too long. To be continued. And you may wonder why it is suddenly autumn. See The Confession.

1 thought on “Bugs and Trees”