We queued outside the church as though we were waiting to see the latest Harry Potter premier. Eventually allowed in we had feared the Sold Out sign would be put up just as we got to the doorway.

The church was packed with just two seats left in the very last row but we risked walking through a capacity crowd to find my brother’s family. By the time we joined him and his wife the short pew was nearly full. “I’m saving this for the rest of them,” he said, indicating a space.

Five more people in eighteen inches of pew. It was show time and people were still pouring in. “I can’t keep this seat any longer,” he said suffering under the glares of standing parishioners and about to give up precious space to strangers as his daughter and family appeared. Somehow nine of us wedged into a space, shoulders overlapping, which would comfortably seat four and a half.

Folding chairs then appeared and all available gaps of floor space were filled with seating, probably not in accordance with fire regulations, but the Reverend looked exceedingly pleased with his full house as he picked his way up the aisle around chairs, loiterers, baby buggies, already restless tots and wheelchairs.

Timorous teenaged soloists entertained us with carols as the church continued to fill to the brim and I prayed for each one of the budding musicians to get to the end of their piece. The trumpeter was so nervous he couldn’t seem to get enough spit going to get a note out of his horn. When he did it erupted with a deafening blast. He managed to put a few notes of Oh Come All Ye Faithful in the right order and then made a hasty blushing retreat. A chubby cellist stubbornly held on to several flat notes of Silent Night, oblivious as he slowly drew his bow across the protesting strings. Even the talented pianist who was trying to accompany him couldn’t cover the wailing. The clarinettist’s few minor mistakes in Away in a Manger then paled into insignificance.

A family of five were shoe-horned into temporary seating in front of us and whenever father stood up for the frequent readings and hymns, the lights appeared to go out in our row as he towered directly over us at 6’8”.

A booming amateur opera singer standing behind us took each of the hymns and carols into a lyrical baritone harmony dislodging my tenuous hold on the melody line.

The children’s choir dressed in robes of midnight blue solemnly arranged themselves on the steps of the chancel. They sang Bring a Torch, Jeanette Isabella in harmonious French, finished in unison as the choir leader pinched her fingers together and turned as one when she swivelled her hands to march back to the choir stalls. As the last few choristers strode in step to their seats, they kicked up the backs of their flowing robes to reveal . . . white trainers . . . . so incongruous, yet somehow fitting, a teenaged wardrobe touch.

There were 275 people in the tiny church, 100 of them children ranging in age from one month to late teens. Communion had still to be served and as the first hour ticked past, the volume and level of activity from the congregation raised. Children became fractious. Parents looked strained. Jimmy and I remained tranquil as they were other people’s children.

The two smallest members of our extended family unit had had enough of sitting still. The baby squirmed on the floor then danced on her father’s lap. She threw herself about with such vigour that concussion on the pew was narrowly avoided. Her big brother took the opportunity whenever we stood, which we were forced to do in unison as all our hips were wedged together, to shed some energy by swimming up and down the slippery pew, well polished as it was by many bottoms over the years. It was quite difficult to concentrate on the readings when his head would suddenly appear between sets of legs.

Thankfully after communion and the blessing of the little darlings, their parents escaped with them to the nursery in the church hall.
Afterwards we sat back down with relief and a bit more space and meditated as the parishioners came and went, came and went, to take communion and return to their pews. The vicar and his mates must have been aware of the state of unrest as they fairly hurtled through the Eucharist but the devout continued to stream up to the altar and race away. I had knelt at the altar for a moment too long and was asked to leave as though in a busy restaurant. Do this in remembrance of me but be quick about it.

Twenty minutes of bread and wine had already been dished out and still the procession continued. Perhaps the next door church had run out of wine and had sent their sinners to us.

“They must be bussing them in from out of state. I’m sure there weren’t that many people here,” my brother whispered. A goodly turnout had been anticipated as six hymns were lined up on the programme to pass the time, but the organist still had to give several encores to cover the sound of pounding feet. Row upon row stood and jogged to the altar to try to keep up with the cracking pace set by the vicar. The taking of bread and wine took half an hour with an average serving time worthy of the Communion Olympics. As far as we could see no one was turned away, the doors remained open and every sinner in the metropolitan area of Tacoma received communion.

We truly felt the spirit of Christmas and as a bonus the ticket price was nil for a wonderful evening’s entertainment. 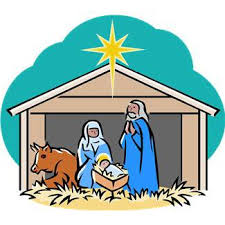